For Sale: Used Silk Blue Metallic 2016 Jetta SE for sale in Delray Beach. Serving Broward and Palm Beach, we are conveniently located North of Boca Raton and South of Boynton Beach. 1.4L TSI Turbocharged engine with a 6-Speed Automatic Transmission. Composition Media 6.3 Touchscreen display with Bluetooth and a Premium Rearview Camera system. Volkswagen Certified with a 2 year 24,000 Mile Warranty available. Clean Car-fax vehicle history report with only one previous owner. 16 Alloy wheels. Heated Front seating. Tilting and Telescoping Multi-Function Steering wheel. Push button engine Start/Stop. Remote Power Central locking system with an Anti-Theft vehicle Alarm System. This is a Very Clean vehicle that is Smoke-Free. Call 561-808-1853. Thank you for stopping by Gunther of Delray Beach located at 2401 North Federal Highway, NORTH OF ATLANTIC AVE on US1. We are your South Florida Dealership specializing in new and quality used vehicles, service and parts. Our knowledgeable sales staff have been trained and certified to provide amazing customer service. Receive an additional $250 OFF our best advertised vehicle prices, please print and bring to Gunther Delray to receive! All prices exclude tax, tag, title, registration fees, governmental fees and any warranty cost or fee applicable to the sale of a car. See dealer for full detail.

Model Overview
The Jetta is offered in a total of ten trim levels, with three different powerplants. The base model offers a 1.4L 4-cylinder engine that makes 150hp. SE and SEL models are powered by a 170-hp 1.8L 4-cylinder turbo, as is a limited-edition 1.8T Sport trim. GLI models are powered by a 2.0L turbocharged 4-cylinder making 210 hp, while the Jetta Hybrid features a turbocharged 1.4L that works in conjunction with a 20kW electric motor, good for an EPA-estimated combined 45 mpg.
A 5-speed manual transmission is standard on S, SE and SEL models, while a 6-speed automatic with Tiptronic and Sport mode is optional. A 6-speed manual is standard on the GLI, with the 6-speed auto optional. The Hybrid comes with a 7-speed automatic.

Packaged convenience options for the SE add many of the premium features of the SEL, including heated seats, a premium audio system and Bluetooth, while a sunroof package includes an even more robust touch-screen stereo system with a 6-disc in-dash CD changer and SD memory card reader, plus a tinted power sunroof. The sunroof is available on the SEL as well, as is a sport package that adds a specially tuned suspension, sport seats and aluminum trim on the pedals and door trim. 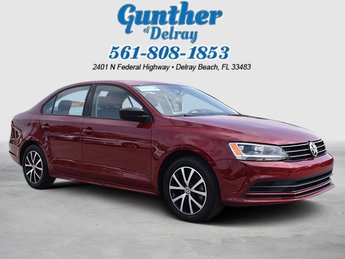 2016 Volkswagen Jetta Sedan 1.4T S
Red
* Pricing - All vehicle pricing shown is assumed to be correct and accurate. Incentives, credit restrictions, qualifying programs, residency, and fees may raise, lower, or otherwise augment monthly payments. Additionally, incentives offered by the manufacturer are subject to change and may fluctuate or differ based on region and other considerations. Unless otherwise noted or specified, pricing shown does not include title, registration, or tax fees and costs. Price subject to change.

* MPG - Vehicle information, as well as features and other inclusions, may vary by model and are based exclusively on standard equipment. No claims, warranties, or guarantees have been made related to the accuracy of customer payments, model equipment, or vehicle pricing. Please call with any questions you might have and to reassert the accuracy of any information presented here.
Close
Close
© 2020 Gunther Volkswagen Delray Beach | Privacy Policy
Much from Remora
Send Now
Close
Search Gunther Volkswagen Delray Beach
Share Search Results

Use this shortened URL to share your current search results.